It’s funny, isn’t it? All Summer it seems like I’ve been really revved-up about walking. With the prospect of long days, plenty of outings and a wonderful two weeks in the Swiss Alps to cap it all, it felt like the excitement would never fade. But last weekend, despite our best intentions, when the time came it seemed we just couldn’t find our usual enthusiasm.

I’m not really sure quite why we both felt that way. Usually, if one of us feels a bit under-motivated, the other will cajole them into going and, more often than not, we end up having a good trip. But this time the malaise appeared to affect both of us equally. In part it may have been that we were feeling a little bit under the weather, although this doesn’t explain it fully.

The thing is, although you imagine you could never want a break from walking, I suspect that is exactly what was needed. After all, most of the time, it seems an age between weekends or holidays and, having just enjoyed a fantastic trip, it is often only the thought of next adventure that keep you going through the week.

In the end, we spent an hour or so on a little local circuit that was really nice in the afternoon sunshine, and at least provided a modicum of exercise in an otherwise sedentary weekend. Hopefully, the break will have done us good and we will be ready for the Autumn delights to come.
Posted by Jules at 06:01 No comments:

The Howgills From Sedbergh - approx 12.75 miles

A beautiful day; warm in the sunshine but with a cool, strong breeze.

After the long drive up yesterday and a half-day circuit round Deepdale, the Occupation Road and Dent by way of a warm-up, a promising forecast had us looking for a good, high-level walk with cracking views. In this respect the Howgills tick all the boxes, with far reaching views, sufficient challenge in the climbs and, hopefully, a little peace and quiet on a Bank Holiday weekend.

We designed our route to take us a bit off the beaten track: not quite pathless tracts, admittedly, but certainly less-well-used ways crossing the access land north of The Calf with around 840m of total ascent. Leaving Sedbergh by gently rising Howgill Lane, we gained a little height before accessing the fells via the track on the lower slopes near Ash-hining from where it was a steady pull of around a mile up to the summit of Winder. 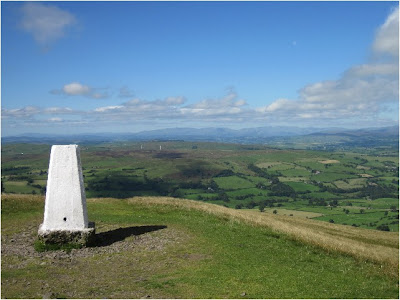 Despite it’s modest spot height of 473m, the views are commanding. On a beautiful day such as this, Morecambe Bay and the central Lakes are clearly visible to the west, with Dentdale, Garsdale and the fells of the western Yorkshire Dales National Park to the south and east. We lingered for a few moments to absorb the views before making the gentle descent on a soft, peaty path to the saddle below Arant Haw.

Skirting round the east flank of Arant Haw we could see down into the Rawthay Valley and beyond to the bulk of Baugh Fell. From the narrow ridge marked as Rowantree Grains a short, steep climb, reminiscent of the Alps, brought us out by the cairn on Calders, from where we paused a moment to look back at Arant Haw and the deep gully of Bram Rigg Beck. 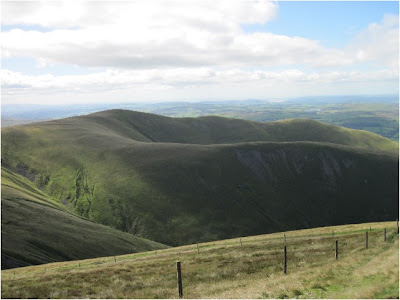 A relatively level path led along the plateau-like summit to The Calf, at 676m the highest point in the Howgills. The first couple of tops had been fairly quiet but after Calders the profusion of paths leading to the summit from all quarters had deposited a sizeable crowd by the trig point.

We moved on a few metres to find a quieter spot for lunch from where we could gauge the lie of the land for the next section. Around us the panorama encompassed Morecambe Bay, the Lakes, the northern Howgills, the Upper Eden Valley, the Pennines and the fells of western YDNP - miles in every direction - whilst ahead, our route stretched along an undulating ridge to the north west.

It’s fair to say we could have spent ages gazing around us but, all too soon, we had to continue. A spongy path led easily over White Fell Head and Bush Howe before the sharp drop into Windscarth Wyke. To our left, the wild amphitheatre of Crooked Ashmere Gills and Long Rigg Beck snaking away westwards below felt huge, as if part of a larger landscape entirely. 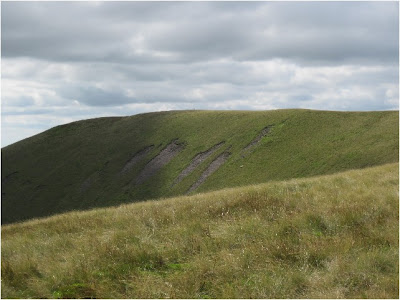 Then, after a short but breathtaking 90m climb to Breaks Head, we reached the start of the enticing ridge joining it to Fell Head. Swinging westwards, with the Lake District plumb in front of us, easy walking took us along the ridge and over Fell Head, accompanied by wonderful views and a sense of exhilaration all the way.

After a quick rest stop, a steep descent brought us to Whin’s End from where a contour path heading south and west round the lower slopes of Brown Moor to meet the lane at Howgill. From here, a quick look back revealed some of the drama of the last 3 miles. 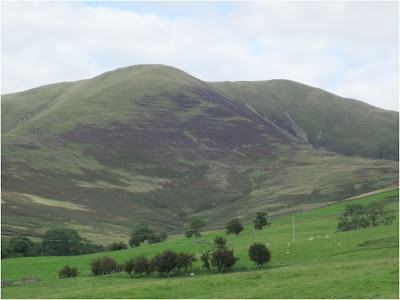 In other circumstance we would have linked with the Dales Way at Crook of Lune Bridge for our return journey, a more satisfying way of completing the circuit. But time was against us, and the call of a quenching pot of tea and Chinese food proved too great a lure. So we headed back to Sedbergh along the lane, watching the farmers taking advantage of a few dry days to gather in the hay. Finally, we rounded the slopes below Winder and dropped down into Sedbergh at the end of superb day.
Posted by Jules at 00:56 1 comment: