After several years of posting to Ambles & Rambles, during which time I’ve logged dozens of trips, hundreds of walks, a handful of gear reviews and a sprinkling of other walking-related issues, I’ve decided the time has come to make a few changes.

To be honest, since the design and format has barely changed since I started the blog back in 2010, it’s probably time for a refresh, so I’m planning to give it a bit of a makeover when I get the time.

So, first of all I’d like to say a big “thank you” to everyone who has read, commented or otherwise contributed to the blog so far – although I do it primarily as a record for myself, it’s always nice to get comments, especially if in some small way the posts have been of help or encouragement to others.

But the big news for me is the launch of Trail Lynx a new site aimed at promoting travel and hiking in the Balkans and Eastern Europe. From now on, all trip reports, travel tips and news items relating to the region will appear there, with the aim that it will information and inspiration and eventually build into a useful resource for those interested in exploring this wonderful part of the world.

To get the ball rolling, the report for our recent long weekend in Poland has been published there, and I hope that you’ll take the opportunity to visit the new site and maybe choose to follow it.

Any thoughts or feedback would be most welcome, and I look forward to meeting up with some of you over there.

In the meantime, Ambles & Rambles will continue to be the home for news and reports from the UK, other parts of Europe and elsewhere.
Posted by Julian Glover at 10:11 No comments:

And so to the final sections of the Capital Ring, the round-London walk we started back in the autumn of 2016. Initially, we’d intended this to be a winter project, but the loss of my father in the early part of this year meant these final few miles had been necessarily put on hold.

However, the opportunity to complete the walk presented itself when we booked tickets to see Tears For Fears at the Royal Albert Hall and decided to book an extra night’s accommodation and “make a weekend” of it.

So, bright and early despite the late night the night before, we transferred out to Falconwood to pick up where we left off before, where our initial move was to tackle the loop through Shepherdleas Wood that we couldn’t complete last time due to rapidly-fading light.

That done, we picked up Section 2 of the Capital Ring, passing through Eltham Park and Avery Hill Park (where we were navigationally challenged for a few minutes) and beside Eltham College on the way towards Grove Park. It was good to be out and about again, and once again we seemed to have struck luck with the weather.

After the parkland and residential streets of Section 2, the next section followed a similar pattern of park areas connected by suburban streets. All of this area was new to us, and despite offering little in the way of challenge, the walking was pleasant enough. 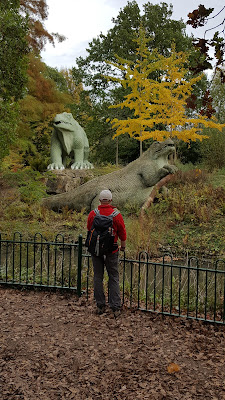 We stopped for a quick lunch break at the café in Beckenham Place Park, then continued on through Penge to reach Crystal Palace Park. All I really know about Crystal Palace is that it used to be the location of the cast-iron-and-glass structure of the same name that was destroyed by fire in 1936, and is currently home to a bunch of large, lumbering creatures whose best years are well behind them. No, not the players of the under-performing football team of the same name, but dinosaurs!

Originally, we’d only planned to walk as far as Norwood today, but with the weather good and time on our side we decided we could make a couple more miles so pushed on to Streatham.

Crossing the Common, we eyed up the buses on the High Road. We had set our sights on eating in Brixton, which was just a few minutes away with transport. Well, you can’t come to one of the country’s premier international food centres and not give it a go, can you?

If you’re a bit of a foodie and you’ve never been to Brixton Village, I recommend you give it a try sometime. The Souk-like interior harbours all manner of curious foodstuffs and enticing ingredients, the narrow alleys reveal something of interest at every turn, and the exotic ambience definitely has a touch of “abroad” about it. We chose a selection of terrine and charcuterie from Corsica – delicious!

Next day, we made our way back the Streatham on a cool but bright morning. The stage between Streatham and Wimbledon Park crosses Tooting Bec and Wandsworth Common, but is primarily walking on residential streets.

So, although the going is easy enough, there is perhaps a little less to enthuse the walker than on some other sections. Still, there were plenty of leaves to kick through on this autumn morning, which helped pass the time and eat up the miles.

Having passed HMP Brixton on the bus, it was now time to walk past Wandsworth Prison, situated incongruously between the green of the Common, the well-to-do houses and Wandsworth Cemetery.

We stopped for coffee in Wimbledon Park, in a café just down from the station. On the morning of the fall-out from Catalonia’s unilateral declaration of Independence from Spain, we found ourselves at a Spanish bar. The papers were full of the story: needless to say, politics was off the conversation agenda.

The final section took us through Wimbledon Park, across Wimbledon Common and via Richmond Park to reach Richmond Bridge. We had covered some of this section before with our friends Celia and Nick, back when we were just scoping the route. The Common was much quieter than last time, when we got caught up with the Wimbledon Half Marathon.

Richmond Park was looking splendid in the afternoon sunshine. After taking a break on one of the park benches, we followed the route between Pen Ponds and on to Pemboke Lodge where we picked up a late lunch. It was busy, and although it was nice to retrace our steps from last year, see the protected view of St Paul’s Cathedral from Harry’s Mound and enjoy the wide view of Twickenham, Windsor Castle and the Thames as we descended towards Petersham Meadow, it was marred somewhat by dawdlers and path-hogs.

We had a final sit beside The Thames, reflecting on the weekend and the walk in full. And overall, we were very satisfied with both. The big advantage of a walk like the Capital Ring is that it is a good choice for the winter months, when the generally easy going and relatively mud-free walking really come into their own.

OK, so it had taken a bit longer than initially planned, but that couldn’t be helped. Having completed both, I think we are of the opinion that we’d tackle the Capital Ring and the London LOOP again sometime – perhaps even as soon as next winter.

Whatever the future brings, we are very glad to have completed these routes – routes that have had the ability to surprise us in many different ways. We’ve seen a lot more of London than we ever had before, grown to appreciate the history, geography, culture and diversity of our capital, and in the process got to know it’s character a whole lot better.

And do you know what? We’re all the better for it too.
Posted by Julian Glover at 09:35 2 comments: