Thanks to furlough, I have more time on my hands than usual. Now that I’ve tackled the essential chores, helped the neighbours, baked bread and zoomed myself into a stupor, finally there’s a chance to catch up on those outstanding trip reports.

It seems strange writing these posts almost a whole year since the trip happened, and it’s been noticeably different compiling them from the photos and brief notes I took at the time plus a bunch of slightly faded memories, but then these are strange times. 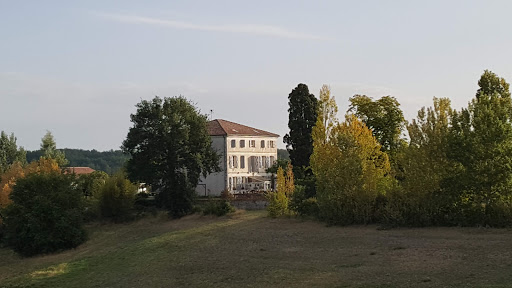 Last time out, we’d ended our walk at L’Aube Nouvelle, filthy and soaked to the skin having slipped and slid our way through a deluge of near-biblical proportions. The proprietor kindly let us shelter from the rain, wring out our sodden clothes and recover some dignity, and all for the price of a café au lait each. We vowed there and then that we would come back and stay – a small gesture we could make to thank them for their previous generosity.

That was two years earlier. In September 2019 we were back, full of excitement, happy to see the sun shining and eager to start on the final fortnight of the Via Podiensis from here to St Jean Pied de Port in the foothills of the Pyrenees, the small town from where we’d started our Camino Frances way back in May 2013.

I’ve mentioned before about how easy we’ve found it to slip into “trail mode” at the start of a new section, and this time was no different, picking up both physically and metaphorically from our last trip almost seamlessly. 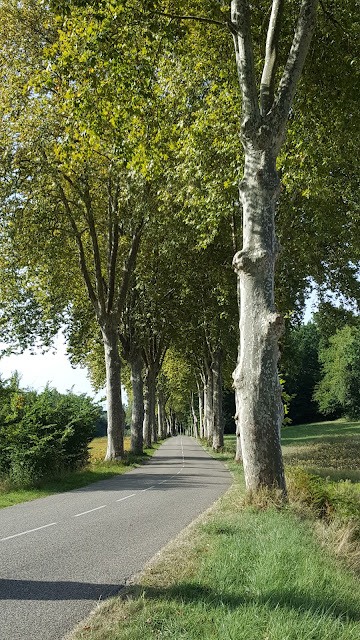 For our first day back out on the route we planned nothing more adventurous than a short trundle, the 12-odd miles to Moissac. It was a fine, warm morning, and we walked most of the day in leisurely fashion with Mark from Oregon. It was his last day on the trail, which gave us plenty of opportunity to reminisce about the trail so far. 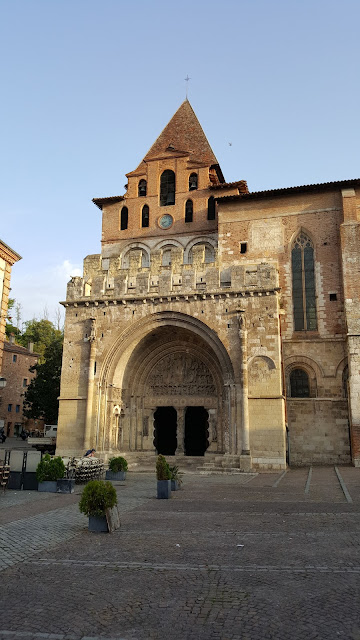 Towards the end of the walk we took a short variant the granted super views over Moissac and the surrounding area, and which delivered us right to the doors of the Abbey. 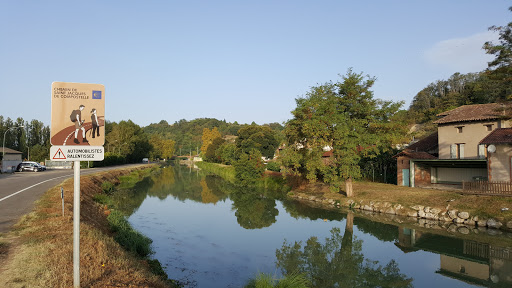 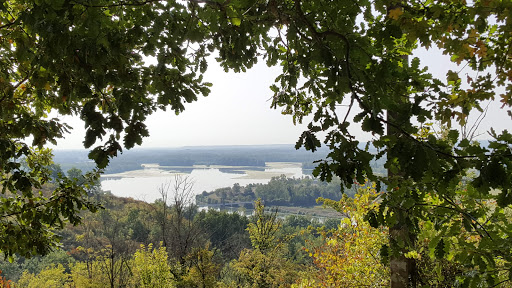 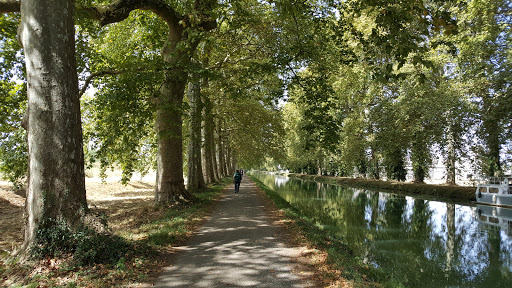 After lunch in Malause, a sleepy, non-descript town, we re-joined the canal then struck off across the flat valley bottom towards Auvillar. After taking advantage of a roadside drinks stop, we climbed to the town – one of the beautiful old “beaux villages” of the area. 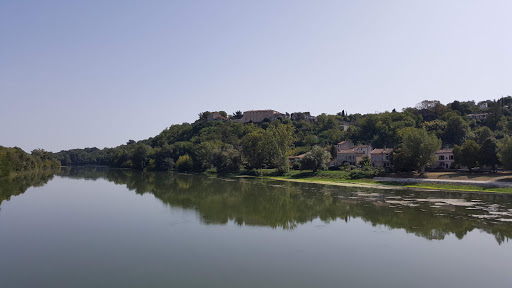 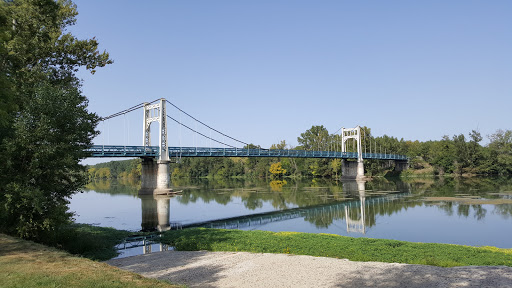 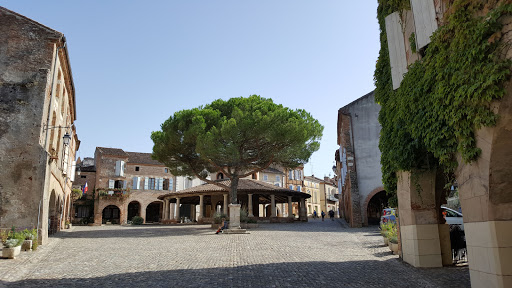 Our overnight stop was a little further on near Bardigues – the beautiful Le Farat B&B. After settling in, we took a swim in the outdoor pool and felt very chic. Dinner was at Le Letit Palais back in Auvillar, the town beautifully lit at night. 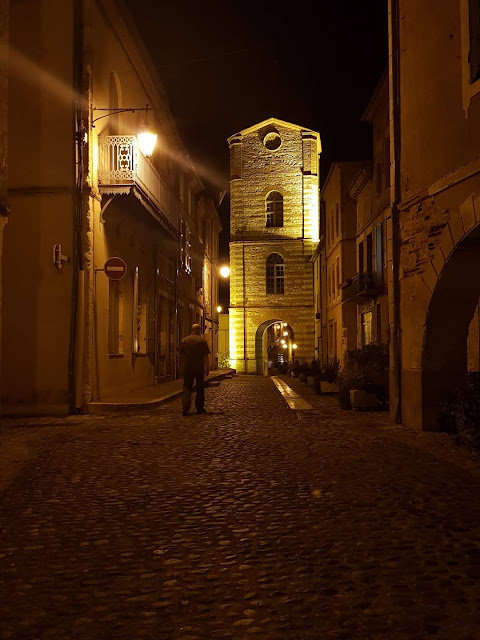 Day 3 was a lengthy stretch from Bardigues to Lectoure. With high temperatures of over 30C expected we aimed to set off early to make the most of the cool conditions, but inevitably on longer days it is difficult to avoid the full afternoon sun altogether. 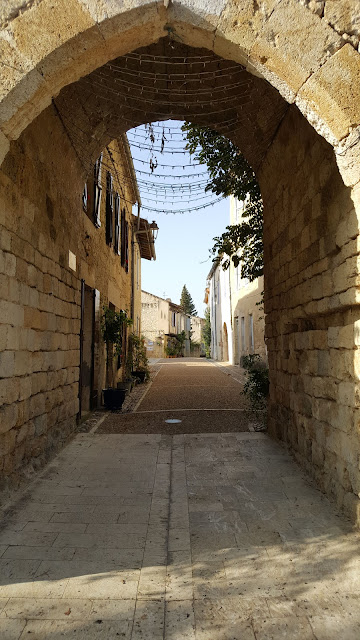 Leaving Bardigues, there were quite a few pilgrims already on the trail. We have noticed that mornings are busier, confirmed by a group of Aussies we chatted with over soft drinks at Flamerens who were only going as far as Miradoux. 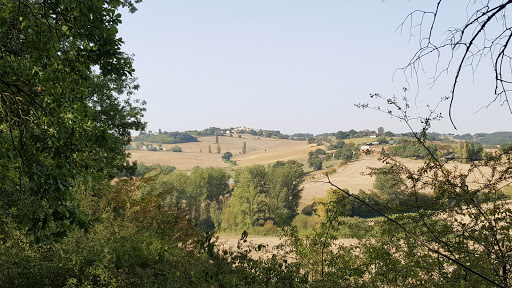 We only stopped briefly there, planning to have a longer stop at the next village. But the shop was closed, so we ate emergency rations and drank water.

Towards the end of the day, as Lectoure came into sight, we passed a roadside fruit stall and tucked into fresh peaches - just what we needed to fortify us for the final stretch. Lectoure is a lovely town. We had a brief look round and bought quiches for tea: sadly, not enough time for a proper exploration. 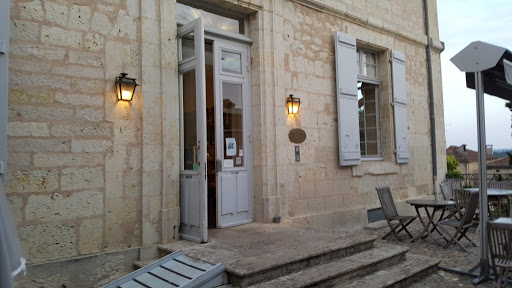 Our fourth day en route was the longest so far, 21 miles from Lectoure to Condom. Setting out early, we bought lunch from the boulangerie then left Lectoure on a circuitous route through the town walls before heading out into the countryside. 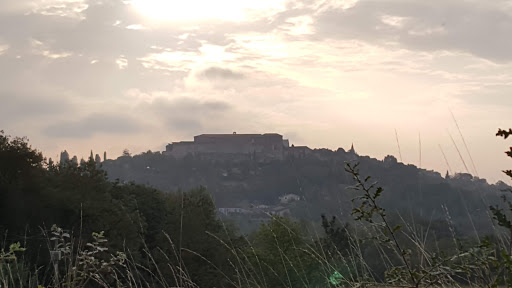 Early morning knots of pilgrims gradually spread out throughout the day, and soon we were walking pretty much on our own. If that sounds a little anti-social, it isn't meant to - company, and the knowledge that other people are about is great, but solitude, or at least quiet, are key aspects of a pilgrimage too. 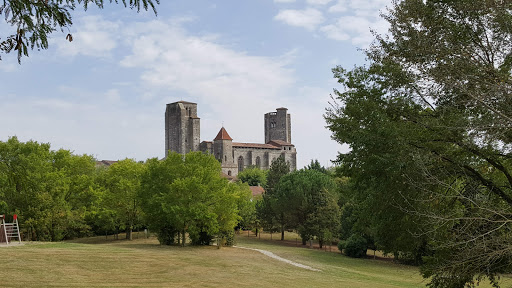 We stopped for water and a breather in Marsolan and pushed on to La Romieu. There is a shortcut that misses La Romieu and saves around 6k, but we wanted full value for our day. We had decided on a lunch stop in the old town, but on arriving at around 1.20pm we were told lunch was "complet". However, with a bit of negotiating we procured beers and coffees, which was actually all we wanted. 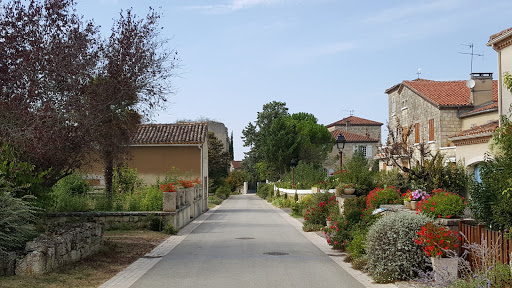 The afternoon was again hot, but we had plenty of water on board and topped up in Castelnau-sur-L'Auvignon. Also, like yesterday, the last 10k of the day skirted pretty much all the towns and villages, and we saw virtually no-one. However, we reached Condom without incident and checked into our digs. It was too late to explore the town, but there was enough time for a welcome shower and change of clothing before dinner. 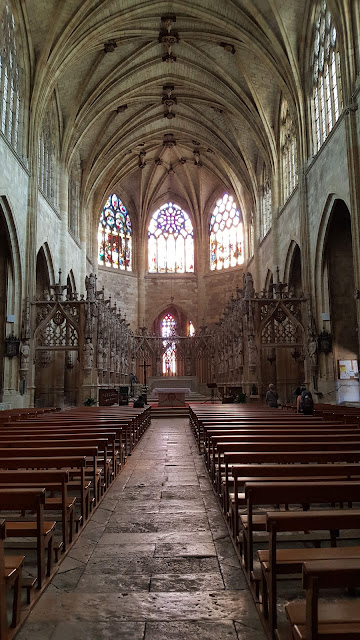