Let’s face it: we all deserve a bit of luck every now and again, don’t we?

Last week a couple of slices of minor good fortune combined to serve up a delicious opportunity we just couldn’t ignore. Firstly, after weeks of seemingly endless rain, a promising forecast predicted good weather on two consecutive weekend days. Then a call came in requiring me to head north on business, this time close to a weekend. 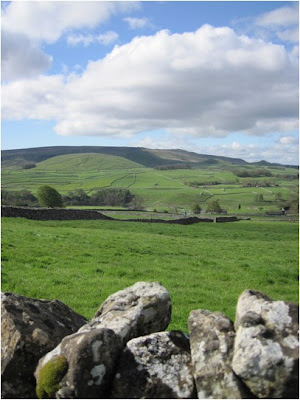 So it was that early on a Saturday morning we found ourselves climbing a gently-rising track out of Grassington, heading across the fields towards Hebden. Fluffy clouds sailed overhead in blue skies whilst all around were lush green fields dotted about with sheep and lambs – spring at it’s almost perfect best. 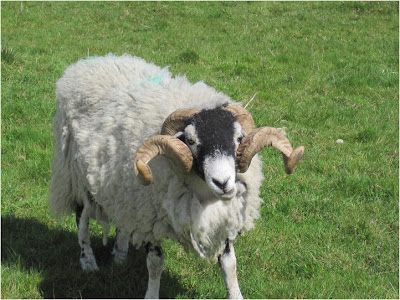 We had reason to celebrate as well. This was our first walk in a National Park since Missyg had her operation, and the first time I had sported a rucksack in over six weeks. OK, it wasn’t as though we were hiking in to Everest Base Camp or thrashing through the Amazon Basin, but little landmarks such as this provide a deserved boost to morale. Recuperation is all about passing this type of minor milestone, and the daily walks to re-build her fitness had finally paid dividends. 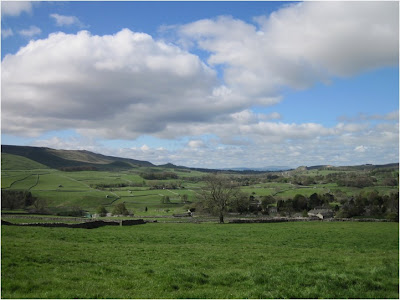 Beyond Garnshaw House the path dropped off the hillside towards the quaint village of Hebden. From here we picked up a pleasant path alongside rushing Hebden Beck, descending to join the Dales Way near the suspension bridge over the River Wharfe. A brief pause was taken to free a ewe that had got her horns caught on a wire fence, a mum unable to eat or respond to her lamb’s plaintive calls. I’m not quite sure what this tells us as a metaphor for life: the grass may well be greener on the other side, but it’s the getting there you need to be careful of. 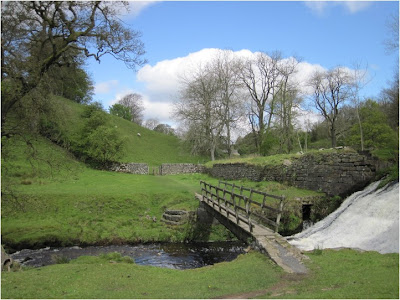 The Dales Way provides easy access to the stretch of riverbank between Burnsall and Grassington. As it was sunny and a weekend, it was inevitably very busy. Strolling along the riverbank it definitely felt as if we were going against the flow as we dodged and “excuse me’d” the oncoming tide of walkers. But we didn’t mind: given our recent lack of outdoor fun we were enjoying ourselves – despite the obvious overcrowding. 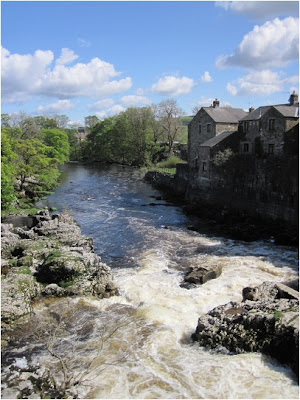 After a quick look at Linton Falls we climbed up into Grassington and headed back to the car for a lunch break and a rest. 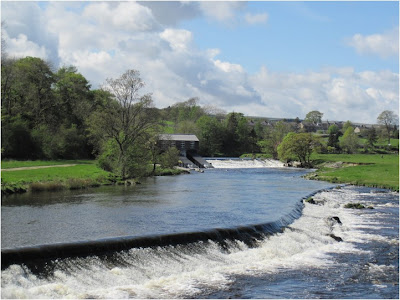 It was a beautiful, warm afternoon, though, a far cry from the almost continuous rain of recent weeks. So we set out again, following the river upstream as far as the rapids at Ghaistrill’s Strid where we sat for a while contemplating nothing much at all. 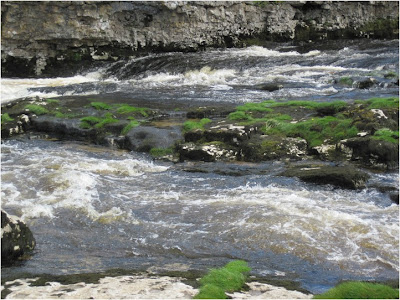 Having enjoyed our evening at Kettlewell YH, we awoke promptly for breakfast pleased to find the early morning cloud thinning and the sun peering through. After a quick assessment of Missyg’s condition, we opted for a low level walk along the Dales Way to Starbotton – a sensible precaution after totting up 8 miles yesterday, her first “proper” walk since the operation. 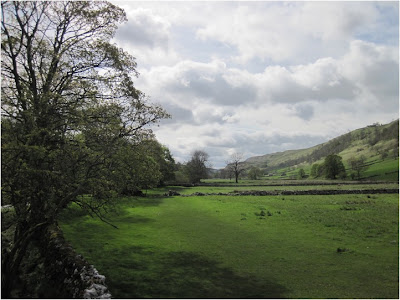 By 8.30am, we had crossed the main bridge and picked up the riverside path. Despite the fairly early hour, we passed a few small groups of walkers – Dales Wayers, perhaps – and exchanged brief greetings. There was plenty of birdlife on show, too, particularly a rather amourous pair of Chaffinches. 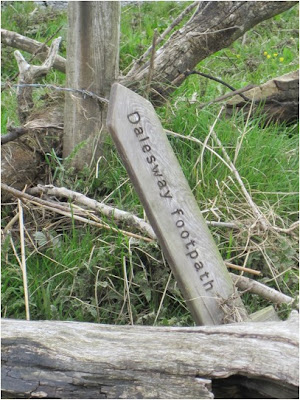 What was far more evident than yesterday was the amount of damage caused by the recent rains. In the flatlands of the south we are still enduring a hosepipe ban, despite over a month of regular rain. Here in the Dales there appeared to be no such shortage, at least in the rivers – or on the banks! Perhaps we should syphon off a share of it – where did I put my Platypus? 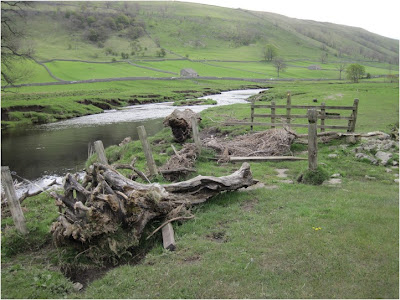 Joking aside, there is a serious point here. This sort of damage can be expensive to repair, putting extra strain on the already stretched budgets of the National Park and ROW. Even if the path itself is not washed away, the cost of repair to the path furniture alone will be sizeable. 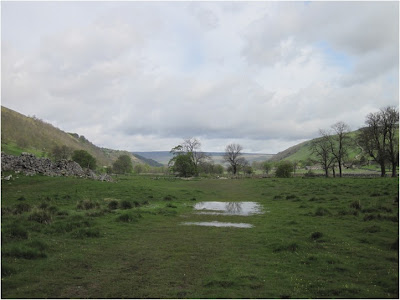 Having reached Starbotton, we turned round and retraced our steps towards Kettlewell. The sun was still trying to break through the clouds, but gradually the clouds seemed to be winning. Still, it was a fine day to be out. There were signs of spring in evidence all around us, and nothing could spoil the feeling of being out in the beautiful English countryside in the spring – especially after our little lay-off. Fresh air and exercise in the Dales – a real tonic for body and soul. 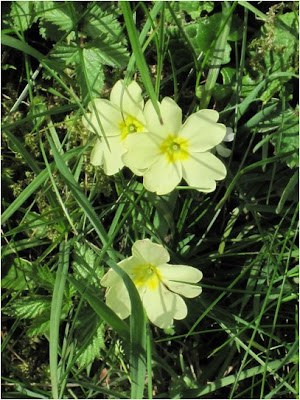 Back at Kettlewell we treated ourselves to an ice cream. Well, it was a holiday of sorts.

Mindful that we had a lengthy drive home to complete, we decided on one final short walk before we set off. The stretch of Dales Way from Hebden to Burnsall seemed a good bet, being only just off our route home. Again, being as it was a nice weekend day, the route was busy. But we were more than happy to just be out there – our days of hacking across soggy fells in a storm will return soon enough. 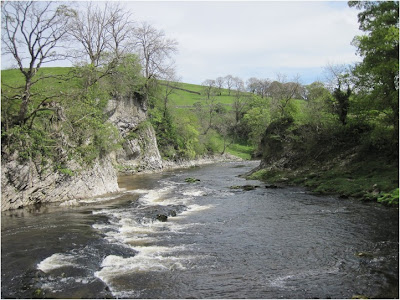 Once more there was evidence of the recent high water level, with detritus piled against the bridge supports at Burnsall. Not so much damage here, perhaps, but it was still clear just what forces were at work. 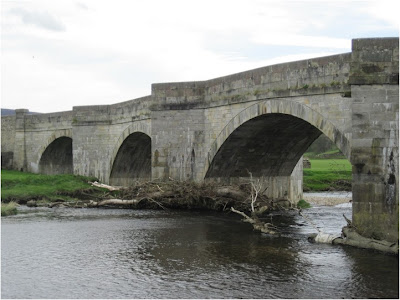 Another point to note: the public loos in Burnsall appear to be no longer funded by the authorities and are being looked after voluntarily by the locals. Good on them! But it reminded me – slightly unfairly, perhaps – that there is a toilet-twinning scheme in existance. Seriously, there is! You can sponsor a loo to be built in one of the poorest parts of the world to help improve sanitation and provide a wider health benefit to struggling communities. I don’t think the authorities would necessarily have thought about it that way, but I’m fairly sure North Yorkshire wouldn’t want to be considered alongside the most poverty-stricken places on the planet.

Whatever. We’d had a great weekend, enjoyed a bit of spring sunshine, got out into the countryside we love so much and notched up over 16 miles of walking for the weekend. What could be a better psychological boost than that?